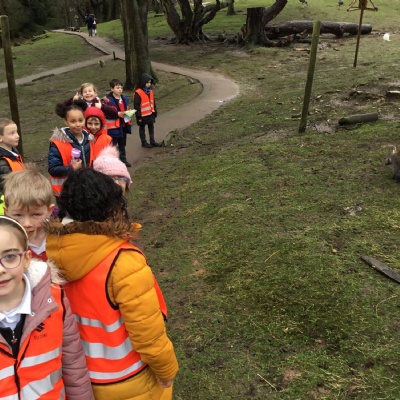 On Monday 24th February we visited Woburn Safari Park and we had a fantastic time.

When we arrived we slowly drove around the safari track and looked closely out of the windows to see what animals we could spot. The first part we drove through was the ‘Northern Plains’ where we quickly spotted some American Bison’s and some camel’s taking cover from the drizzly rain in their huts.

After that we continued through the safari and saw the Southern White Rhino’s resting in their shed, we were so impressed at how big their horns were! Then, we had to drive through a special gate where we entered the tiger enclosure. We were all extremely excited and it didn’t take us long to notice that one of the tigers was sitting up high in a tree. How amazing is that! As we drove around there was a tiger sitting by the road, which meant that we got a great view of their stunning, striped fur.

Next, we drove up a steep hill where we noticed one of the black bears sitting in the grass. The best part of the safari was driving through the monkey’s enclosure because as we drove around carefully a cheeky monkey jumped on the bus’ mirror, which was very exciting. Finally, we finished the safari part of our trip by driving past the beautiful lions and their cubs that were playing together in the field.

Afterwards, we got to spend time exploring the rest of the safari park in our groups. Miss Dowsett’s group saw the otters being fed, which was very interesting because they were all trying to get the food off of each other and they made a very high-pitched noise. Some of us also went to watch the parrot show, where we were introduced to three colourful parrots that flew right above our heads.

Overall we had a fantastic day seeing lots of different animals and we would like to say a huge thank you to our parent helpers that came with us.

Have a look HERE for some photos from our trip.