WHAT AN AMAZING STUNNING START! 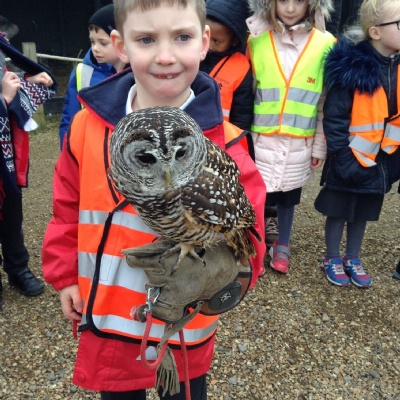 On Monday we went to Herring Green’s farm and Birds of Prey Centre! Despite being cold the rain only visited briefly at lunch time so that did not spoil our day!

Upon getting off the bus we were met by Charlie and Lisa who explained to us about the animals and what we would be doing. We then split into two group. One group went to go meet the guinea pigs and were able to hold and play with them. The other group went to the bird site. Here we met Oscar and Titch the owlS.  We all got to hold Oscar and Titch and had our photo taken with them. It was very exciting and we were amazed to hold an owl up close. Titch was an older owl and was very gentle. Oscar is much younger and weighs just 8 ounces, the same as 2 teaspoons! Then we swapped over.

Just before lunch we watched a flying show and we saw a snowy owl fly and a falcon called Colin. He was super-fast and loved having the wind beneath his wings!

After lunch we had a quick look around before moving onto the second lot of activities. One group went to meet Sonic the hedgehog and Barry the bearded dragon. The second group went to the birds of prey site and here we were able to fly a tawny owl called Midge. We had to stand in a line, very still with our arms out and Midge flew from one of us to the next person! Even the adults had a go!

Once we had completed our activities we were able to go explore the birds and everyone enjoyed the black headed caracara bird, which would laugh and then tip his head back!

We had a brilliant day and we have learnt so much about birds already to put into our writing over the next few weeks!

Have a look HERE at some photos from the day