LEARNING AT HOME AND AT SCHOOL! 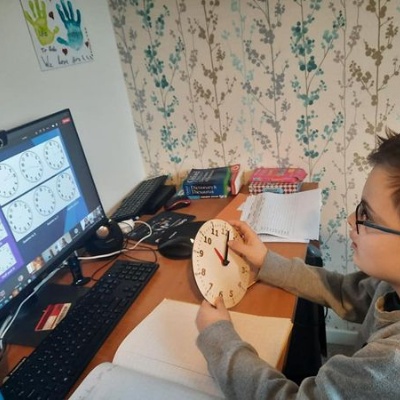 Several of the children in Year 4 have shared about what they have been learning this month.

Simrita has shared about lots of diffent lessons: In English we are looking at a book written by Michael Morpurgo called Kensuke’s Kingdom. We have been writing character descriptions, newspaper reports, recounts and diaries. In our diaries we wrote where the family had travelled so far. In places- Southampton, Australia, Africa and Brazil. In our newspaper reports we reported the disastrous thing that happened while on their travels, but we don’t know how it all happened!

So far In maths this half term we have been focusing on fractions and decimals. With decimals we have done things so far like decimal equivalents and sequencing decimals with linear and non-linear patterns. With fractions we have found equivalent fractions for one and other, solving fraction word problems, finding fractions of amounts and adding and subtracting fractions with the same denominator.

In Geography we have been using Google Maps and Google Earth to help us with our work which is about places around the world and finding their temperatures on the PowerPoint.  We have looked at the six different world biomes, climate zones and vegetation belts.

To find out more about gases we did an experiment (at school and at home) to find out how heavy carbon dioxide is.  To do this we had to measure out three different fizzy drinks, weigh them and them swirl them around to make them go flat, we then weighed them again to see if they had got any lighter.  Bradley found out that Carbon Dioxide does have weight because his Fanta weighed 94 grams when it was fizzy but 93 grams when it was flat! Have a look HERE at some photos from the lesson!

In DT we have been looking at six different types of herbs called mint, chives, parsley, basil, tarragon and rosemary. Mint is used for mint tea, chocolate mousse, fruit salads, Thai curry and soup. Chives are used for green salads, potato salad, jacket potato, butter and soup. Parsley is used for making pesto and best with fresh ingredients. Basil is used for putting on pizzas, tomato soup and pasta sauces. Tarragon has a strong flavour that’s a mix of sweet aniseed and a mild vanilla. The Latin name for rosemary is sea dew. It can be used to flavour pizzas, bread and scones. We have also made a plate of food in our books to show what makes a healthy diet and the five different things that make up a balanced diet.

Vaisli has enjoyed moving onto time this week he wrote: We started a new maths topic this week and have been learning about time.  Firstly, we were working out the time on an analogue clock and converting it into digital and 24-hour clock.  That is one of my favourite parts because this will be very useful in everyday life.  We've also had some problem-solving questions, which was tricky but luckily I had a wooden clock at home to help me.  Learning from home is lonely sometimes because I have no learning partners to help but I can get through my work quickly and then spend time with my little brother!

Here is a link for a game to help you learn time: https://www.sheppardsoftware.com/math/time/clock-splat-game/

Marittika has written about Children’s Mental Health week: Mental health is mind health, mental health is important because if you have a healthy mind it is much better than being sad or depressed.  In 4D each morning, this week, we did exercises to express our feelings.  We have also been doing things such as drawing our calm place and talking about feelings.