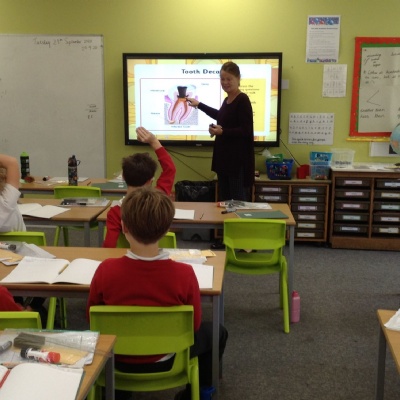 In science we’ve been learning about teeth and how they can sometimes get something called tooth decay.

We are really lucky to have a teacher called Mrs Cartwright who is also a dentist surgery manager so she taught us all about teeth and decay.  She told us that tooth decay is when your tooth has lots of plaque on and it turns sugars in to acid. Ways to stop tooth decay from getting worse are brushing teeth at least twice a day and not eating too much bad food for your teeth like sugary things. We also learnt that if you brush your teeth before your breakfast it will be better than brushing them after. This is because plaque is minimised and that your mouth will wash your teeth a few minutes after eating.  Mrs Cartwright taught us how important it is to keep our teeth clean.

We have also drawn a table to write down what is actually happening during the experiment so we can monitor how long it takes the ‘tooth’ to decay. For example, one of our questions was, which liquid causes tooth decay the fastest. Then we did the the equipment, we put an egg in a plastic cup. It was awesome we had different liquids such as lucozade, vinegar, lemonade, milk, water. We put an egg in a plastic cup of each liquid then we left them for a few days to see how they have rotted so we can write all about it in our books and fill in our tables. After a few days we saw that some of the eggs have cracked a little bit. But the vinegar’s enamel (egg shell) had come off, it was still there it had just turned into a yellowy brown colour. The milk had turned all creamy and covered the egg with it and the end looked like an egg was popping out. It was not a surprise to see the water was has not changed the egg but the water did make it look shiny although we were surprised to see the lemonade has got lots of patterns on the egg made of sugar.

We can’t wait to see what the next few days bring.

By Avni and Lara