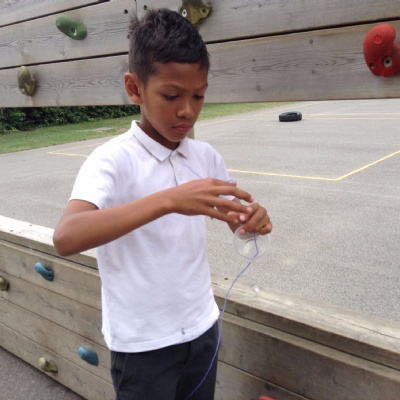 Year 4 spent the morning learning about how vibrations make sound.

We made a telephone from cups and string and found we could actually hear each other as our voices created a vibration which then travelled down the string to the person listening on the other side.  We found though that if we blocked the vibrations by pinching the string then we couldnt hear each other!

Using drums we tested how making louder and quieter sounds would alter the vibrations! We put rice on different drums and then hit them hard to make a big sound and found that the rice jumped higher than if we only taped the drum gently which showed us that loud noises were made from big vibrations and small vibrations made quieter sounds.

We also took time to listen to the sounds around the school we discussed the sounds we liked and what we didn't like so much, we also considered if sounds were man made or natural and if it was possible for one sound to block out another!