YEAR 6 RESIDENTIAL TRIP TO BRHYER IN THE ISLES OF SCILLY :) 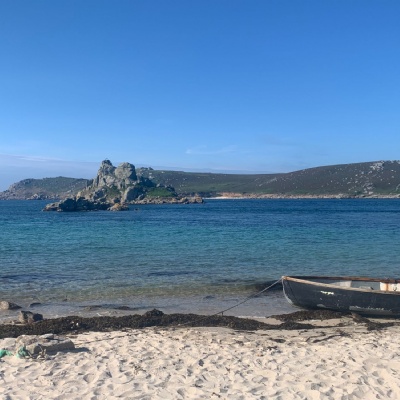 Between 21st-28th June, Year 6 visited the amazing Isles of Scilly and stayed on a beautiful island called Bryher.

We set off at 10pm on the Sunday evening (20th June) for our long coach trip to Penzance, where we caught the Scillonian ferry, approximately a 3 hour journey, across to St Mary’s Harbour. Once we were at St Mary’s Harbour, there was just the Firethorn of Bryher boat to catch and a 20 minute trip across to the island of Bryher. So a 10 hour journey roughly altogether but it was definitely worth it! As you can imagine, we were all pretty tired after a day of travelling and pitching up tents so the first night was fish and chips at the local restaurant – The Fraggle Rock – and a trip to the beach after dinner before a well-needed rest. Day 1 done.

On our second day, we walked across the island to a stunning beach and, because it was such a beautiful beach, we stayed there for most of the day and watched the tide gradually venture inwards. This was a day to go in the sea and to see some islands that we have read about before within school; the island of Samson could be seen from the beach. Following an enjoyable day at the beach, we returned for dinner at The Fraggle Rock, played on the closest beach until evening and then returned to camp for hot chocolate and bed.

Day 3 already. We travelled across to the island of Tresco on Day 3 and wow – what a beautiful island! We did quite a lot of walking and walked across the island to the old ruins of King Charles’ castle and saw Cromwell’s castle. King Charles’ castle had to be demolished: they built it on top of a hill for defence but realised that they couldn’t fire the cannons because they had to point the cannons downwards to fire at boats but the cannonballs wouldn’t stay in the cannons. The stones in good enough condition afterwards were used to build Cromwell’s castle. We were also fortunate enough to be invited to view some of the gorgeous sub-tropical gardens on the island. Following pizza at The Fraggle Rock and an evening trip to the beach again, it as the end of Day 3 already (somehow).

The top item on the agenda for day 4 was a wildlife trip and we were so fortunate with all of the wildlife that we managed to catch a glimpse of: puffins, with freshly-caught fish in their beaks; seals, sunbathing on the rocks; and diving seabirds, attempting to catch their prey. We also heard about a lone Walrus in the area called Wally but we didn’t manage to catch a glimpse of him. After another evening on the beach and a hot chocolate before bed, day 4 drew to a close.

Because of the midday boat back to the mainland, we started packing away the tents at the end of day 5 – which required a lot of teamwork. We said our emotional goodbyes to the campsite and the beautiful island and started the journey towards home. Although we built memories that will last a lifetime and saw a beautiful part of the world, we were also looking forward to seeing our families again. We arrived home at approximately 3am on Saturday 26th June.

What an incredible trip it was and what an amazing way to end our time at The Hills Academy and our time in Year 6.

Thanks for the memories, Bryher!