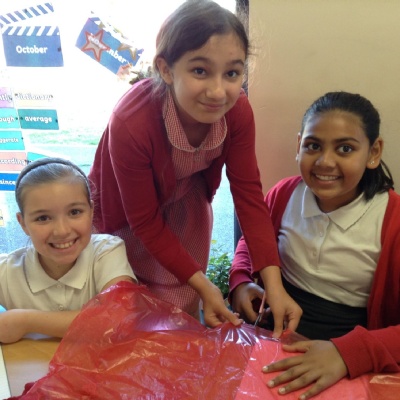 Last week Year 5 designed and made parachutes to test which fabric made the best one. We also investigated the different forces, which were: air resistance, gravity and friction.

We could not make them life size so we used Lego people to be the person in the parachute.

To make them we used kitchen roll, bin bag, paper, cloth and tissue paper. All of us had to use 3 variables to make the experiment fair, we also made 3 parachutes. We tested all three parachutes to see which one was the best.

To find out which one is the best Parachute we timed each one to see which one took the most time to reach the ground. We recorded the information into a chart.  If you don‘t know what a force is then we will tell you!

Gravity: a force that pushes down on us.

Air resistance:  is a force that pushes upwards so we don’t get sucked into the earth’s core.

Friction: is 2 surfaces that rub together to create a force that is called friction

Have a look HERE for some photos from our lesson

We hope you have learnt something new!

By Alessia and Riya T